About the Head Buttmunch In Charge 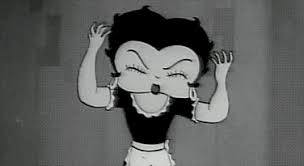 I was born on February 15, 1965, in Denver, Colorado. I feel like the picture above a good deal of the time.
I have a trifecta of psychiatric conditions: rapid cycling type 2 bipolar disorder, borderline personality disorder, and obsessive-compulsive disorder. I may also have ADHD. It's never been confirmed, but the signs point to it.
I have a myriad of physical issues. My endocrine system is an absolute dumpster fire. I have widespread, low-grade chronic pain. I am not sure if this is "true fibromyalgia," or if it is part of the endocrine system trash fire. My back is shot and I had a serious injury to the median nerve in my left arm in 2017. Fortunately, I no longer experience chronic severe pain from the injury. I can feel my arm and it functions mostly normally (I don't have a full range of motion with it) but it is numb and tingly. You know the way it feels when you've had dental work and the novocaine starts wearing off? That's how my arm feels all the time.
I have always been creative. I have many other universes inside me. It bothers me that nobody else understands them.
As a person with rapid cycling type 2 bipolar disorder, there are times when I don't give a rip if anyone else understands my worlds because my worlds are fantastic and fabulous.
At other times I feel like I should give up writing entirely because nobody understands me at all.
When I'm in a hypomanic state, my mindset is "to hell with it if anyone visits ever. This is great stuff here, truly a work of art! Screw 'em if they can't see it!"
When I'm in a euthymic state, my mindset says "if they come, they come. If not, they don't. So it goes. I'm going to create it anyway."
When in a depressive state, the mindset is: "nobody likes me, nobody ever did like me, nobody ever will like me. I'm worthless, I'm scum. I should destroy everything I've ever written and then top myself."
I'm used to the roller coaster, but although I know what to expect, it doesn't stop me from actually feeling those things.
If my brain is a box of chocolates, some of them are the high-end stuff which makes one wonder if they'd died and gone to heaven when they eat it, some of them are just serviceable chocolate for when you need a piece of chocolate, and some of them are the freaking Springbolt Surprise.
And there you have the nut in a nutshell.