Crazy Creatives Come As You Are Party + Weekend Wrap-Up + The Cheese Grates It: The Green Manalishi With the Two-Pronged Crown 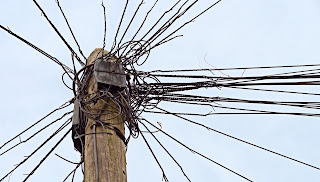 If you're the sort of person whose brain resembles a busy and chaotic train station, bus terminal, or that pole in the picture, you know what I mean. It could be ADD/ADHD. It could be OCD. It could be bipolar disorder. Or, if you're like me, you have all three. Well, my friend, then you are really fucked. But, hey, I sympathize.

If you're this sort of person and you decide to be a godforsaken fool (like I am) and put yourself out there even though you know you're opening yourself up for criticism and misunderstanding by the metric fuckton, you know damn good and well that you can't win. So, either you hide your light under the proverbial bushel (I'm not sure what it's a bushel of, but it has light hiding under it) or you throw down and let the world see a level of coolness that they cannot possibly understand.

And then the criticisms start rolling in.

If you're like me and have lots of blogs because it's super-important to the OCD part of your synaptic mess to CATEGORIZE THE UNHOLY FUCK OUTTA EVERYTHING, you'll get people chiding you that you should put everything on one blog.

In a word, fuck no. Yah, that's two words. Fuck is a frequently used emphasis word around these parts. The main word is "no," covered in a big scoop of "fuck."

If you do decide to put everything into one blog (I have a couple of catch-all blogs so I can see what this would look like) then you have people bitching that they can't understand what your blog is even about because their god forbid that everything isn't neatly categorized just the way they like it.

To these people, I say:

Do you have to live inside my head? No? Well, lucky you. I do. Sometimes that little task is really tough, so I try to make the most of it. Creating crazy shit is a way to relieve some of that pressure. The other way would be blowing the top of my skull off with a shotgun to let all the marauding thoughts out. I know you'd probably like that, but since they ain't found a way to force my hand yet, I've decided against that plan for now. Who knows, in the future, you may get your wish.

I would also like to ask if these people are paying my salary. If you paid me to design a blog or website for you and it was a spiderweb of chaos, then you have every reason on Earth to be mad and refuse to pay me. If I didn't come to you asking for payment, then you don't have any cause to be telling me to change my evil ways. I'm not forcing you to read my blog(s).

A lot of the time, people who are really quick to harshly criticize or ridicule people who do things in a way contrary to what they themselves would do are the same people who say: "oh, I would never make fun of or hurt a person with autism, learning disabilities, neurological dysfunctions, or psychological issues." However, these people think it's funny to make fun of "weirdos" who are "acting weird", or they think it's acceptable to talk down to us and treat us as if we are sub-human and lacking in basic intelligence.

Here's a two-pronged contradictory fact. This is my very own Green Manalishi With the Two-Pronged Crown.

I like interacting with creative spirits.
I hate networking.

The trouble is, I tend to naively believe that all creative people are weirdos like me, but a lot of them are normals who don't get weirdos like me one single bit and would like to squash us out of existence or force us to fit into the 'normal' mode, squeezing the souls right out of us with derision and pharmaceuticals.

Networking bumps me up against a fair number of these people. I fucking hate networking. Loathe it. Despise it. I would love to kick networking to the curb, but if I want to get the word about the services I offer out there, I have to keep doing it.

I've been thinking about the guy in the following photo a fair bit recently. Probably because I've been conducting seances to ask him to impart to me a portion of his mechanical abilities. He could fix just about anything. I'm a numb-nuts living in a very old house with a bunch of ramshackle appliances, and I have all the mechanical aptitude of an earthworm.

So far, I haven't come up with the right offering of food and incense to invoke him. Or maybe the lighting is wrong. Probably both.

You can decide for yourself if I'm serious or not. One thing I do have in common with him is enjoying fucking with prats lacking a sense of humor. 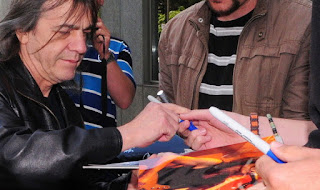 Another thing I have in common with him is crippling shyness combined with a tendency to lash out if I feel like I'm being attacked. I managed to avoid the addiction to alcohol. How, I'm not sure, because I was a very heavy drinker when I was younger and there is a strong tendency for addiction in my family. We had depression in common, though. Now, if only I could symbiotically pick up on the mechanical aptitude--my man, let's talk! I've been having problems with my washer recently. Could you, like, come and possess my hands for an hour or two?

I'm revealing a bit more of my very weird sense of humor than I've allowed myself to do in a while. People don't get my sense of humor, and I get tired of trying to explain myself. So, you know, I hide my light under a bushel. In my case, it's probably a bushel of unwashed laundry.

My brother used to get my sense of humor. When we woke up on Saturday mornings before our favorite cartoons came on, we'd sit around making up dumb stories for an hour or two. I miss the friendship that I had with my brother before life beat that weird whimsy out of us. I kept writing stories because it's a thread that keeps me in the world, but sometimes I'd just like to let go and fall into the darkness.

I need to figure out a way to switch more in the direction of proofreading than book reviews. Authors don't tend to hate proofreaders. They tend to see proofreaders as helpful. Book reviewers are generally seen as assholes who want to destroy what the author has built. Despite the fact that I appear to be extremely prickly and hard-headed, I really don't like having people hate me.

I guess that's about all for this party. That was fun, don't let the door hit you in the ass on the way out. Don't forget to thank the Green Manalishi before you split. 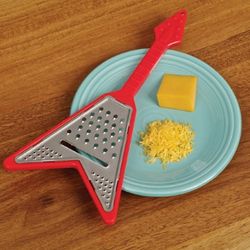