By the Light of the Moon: Atmospheric Blocking and Lightning Sprites 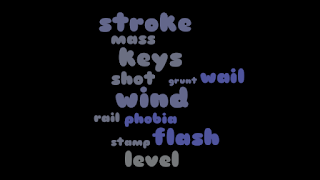 "You sure the atmospheric blocking is in place, Marty?" Lester Baruch inquired, scanning the lake and nearby woods for spies.
"For the millionth time, Les, our mad piper Parson Dae-Jung has the lightning sprites dancing a merry jig to the tune of his warbling pipe all around and above this place. We are well blocked from spies both physical and magical. Should they attempt to discern our words, they will hear naught but the wail of the wind. As for spies from below, Israel will stroke his zither and stamp the ground, and they will hear naught but a grunt and a grumble when they attempt to listen. We have a high level of protection surrounding us. All the keys are in the locks and our words shall pass between us alone. Should the barrier be breached, a mass of sprites will send up a flash like a shot. Now, let us commune. I hunger for your words."
"You always were a poetical goblin," Lester grunted. "You and Willy both. Now, Martin, you need to listen to me good. What I am proposing is extremely dangerous, not only to me and Carlene but to you and anyone else agreeing to help us."
"I understand that, Les. Ordinarily, I'd advise against it, but it's your only shot at..."
"It's Carlene and Willy's only shot at achieving any kind of peace," Lester interrupted. "I got a feeling that if this don't work, it won't be just Willy I'm needing to be freeing from becoming a malevolent revenant. That damn fool niece of mine done bonded to him, and I got a phobia that she ain't gonna survive if we free him prematurely and let the town elders of West Murkfell cremate his corpse. But before I allow you to get involved with this, I gotta make sure that you understand. If you're caught and they interrogate you, you had no way of knowing what was going on. You block your mind and play dumb. You tell 'em you was just helping a friend."
"I'm just doing what I'm told," Martin stated with a docile smile.
"Now that's the stuff!" the gruff necromancer praised, patting his companion's back.
"So, tomorrow, we create a doppelganger of Willy and send the real Willy to Vedrapnak Falls with Old Michael Rioja by rail," Martin mused. "An excellent choice! I wish I could do it myself, but given my recent interactions with you, my presence might arouse suspicion."
"Mike's reliable, and he's a powerful cuss although he looks frail as an ole China cup," Lester agreed.
A rustling in the bushes set both men on their guard. Martin prodded at the bushes with his staff. There was a yelp, and Lester reached into the bush, dragging his niece out into the open.
"Carlene, what the hell are you doing sneaking around here like a scurvy coyote?" the necromancer demanded.
"Well, I knew you wouldn't let me be in on what you were planning. But I have a secret that I need to tell you. C'mon, get closer, I can't let anyone else hear this secret."
Lester rolled his eyes.
"Carlene, you are so full of it!" he sighed as he leaned in closer, only to have Carlene wrap him in a hug.
"Really, Chickie?" Lester grumbled, trying to appear gruff, but failing as his eyes filled with tears and a smile played at the corners of his mouth.
"I love you," Carlene declared. "After the rest of my family was killed, I didn't want to live, but you were so kind to me in my darkest hour that my desire to live came back so I could stay with you and help you. I know you want to protect me, Uncle Les, but I am your apprentice as well as your niece and surrogate daughter. You cannot keep secrets like this from me. If we are in this, we are in it together."
"Les, if the sentinels didn't detect Carlene's presence, we may be compromised," a wide-eyed Martin warned.
Lester waved his friend's concerns away.
"Ain't no atmospheric blocking can deter Carlene, and she's friends with the lightning sprites," he stated. "They let her by because she ain't a threat except maybe to herself. Guess I can't do nothing about the fact that this gal is hell-bent on putting herself in the path of danger. You are certainly your mother's daughter and my niece, ya stubborn cuss! Yessir, this one is a Baruch through and through."


Since I love Rickey Medlocke, we just won't go into what I think about his reforming the band as a Blackfoot cover band without a single original member after having lawyers send cease and desist letters to the band's original surviving members aside from himself, ordering them to stop using the name. Sorry, Rickey, but not cool.
Oops, guess I went there.
- September 30, 2019
Email ThisBlogThis!Share to TwitterShare to FacebookShare to Pinterest
Labels: Carlene Washington-Baruch, Lester Baruch, Martin Watson, putting my feet in the dirt, so prompt, song lyric sunday, Sunday Whirl, Word of the Day Challenge, writing prompts, writing prompts daily