Nyarlathotep's Necropolis: A Reincarnated King from an Ancient Moon 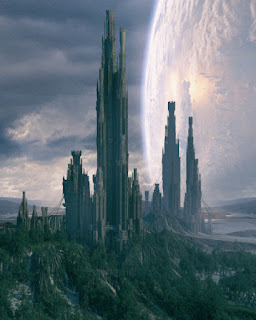 Cassandra found Gerry at the north end of the morgue preparing to exit into the dark regardless of the danger. She gently gripped his shoulder.

"Gerry, I'm aware that you are very unhappy at the moment, and I think there's something you're not telling me. I am ready to listen to you. I think it would be best if we worked together. He may joke about making a meal of you, and I have no doubt that he would gladly consume your corpse if he found you dead. He is no murderer, however, and as long as you are alive, he will protect you at best and leave you be at worst. The other ghouls in this city, however, are not likely to have the same ethical code that He and I have agreed on."

"Unhappy ain't the half of it, Mum," Gerry revealed. "I am extremely, exceedingly unsettled to find meself back in a body which died a year and a half previous. Beggin' yer pardon, Mum, but I feel like a bloody walkin' corpse, even though the heart's beatin' and the blood's pumpin', and I have to piss and shit again, inconvenient though that is. Fortunately, He don't seem that concerned about me holding in my farts, which is a good thing considering that the bloke has a fondness for cabbage, and I ain't been able to eat no meat since comin' here 'cause I don't trust it not to be human flesh. Well, do listen to me. That was a right embarrassment. Bet you'd not believe that in one of me former incarnations, I was King of the Selene Empire."

"Gerry, during the past year I've been turned into an Undead and have worked with cultists who hope to bring down the wrath of ancient powerful beings from beyond the stars. Your claim to reincarnation doesn't faze me at all. I'd be interested to find out more if you'd like to tell me."

"I'd be interested to show you if you'll let me take you. We ain't gotta walk outside or nothin'. This ain't me first time in this city. If we walk down the corridor, we end up in Xura, and we can flag down the white ship. Or I can draw a gate and we can just go there direct."

"Direct is best, I say," Cassandra mused, studying Gerry in an attempt to determine if his mind had created a fantasy to make an unfathomable reality more bearable, or if this roughshod, ragtag little man was actually the reincarnation of an ancient sorcerer-king. "Will we need an apparatus to breathe?"

"The palace and the grounds are contained within a protective dome," Gerry revealed. "They sprang from a drop of my blood when I brought my people to safety from war-torn Avalon to the moon. I was an elf then, y'know. Not one of them tall blond blokes like you see in the Lord of the Rings films, mind. I looked rather like I do now, in fact, only with pointier ears. There's more than one variety of elf, y'know. That's one of the things them movies don't tell you. My kind were wood elves, known by the tall blond lot as low elves."

When they reached the boiler room, Gerry took what appeared to be a piece of chalk from his pocket and began to draw strange symbols on the wall, some of which Cassandra recognized from her work with the Cultists. The little man intoned a spell and a gateway formed between the symbols. Gerry took Cassandra's hand and led her through the gate. The pair fell through pitch blackness for what seemed an eternity.