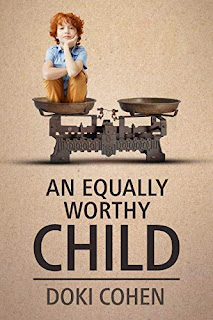 Disclosure:
I received a free copy of this book for review purposes.
This is a duplicate of my review of this product on Amazon.

This brief book gets right to the point in addressing a problem which is extremely prevalent in a society demanding a certain very specific variety of excellence and perfection from all its citizens. The author initially discusses her own feelings of being "less worthy" despite being a good student who was accepted by her peers and growing up in a stable household where she was treated well by her parents and her needs were provided for.

The age-old nature vs. nurture debate is addressed in the book. The author provides evidence that the nurture component is the one which plays a key role in whether or not a person feels worthy. Even individuals who grow up in impoverished circumstances may feel equally worthy if feelings of worth were modeled by their parents and passed on to them.

As someone who grew up in a household where accomplishments, a certain type of very narrowly defined physical attractiveness, and wealth were measures of success, I failed in every way. I learned at a very young age that I was a "bad" child and not worthy. My parents saw themselves as failures. As often happens in such a situation, there is one child who excels and one who constantly fails. My brother was an overachiever who pushed himself well beyond his limits constantly. Although he was not a stellar student, he excelled in other areas such as sports, and he was very popular. I was a B student who was physically uncoordinated, I was physically unattractive, and I was the target of bullying. I used drugs and alcohol to cope with the cruel way I was treated by my peers, with my parents' evident disappointment in me, and with my then-undiagnosed mental illness.

The author's revelations of her own struggles spoke to me, although her experiences were not the same as mine. This book is written in an easy-to-read fashion without talking down to its audience. It addresses a serious societal problem: the push to create a society populated by only the sorts of people who reach a very high bar in areas of perceived physical attractiveness and personal accomplishment. Anyone who falls below these ludicrously elevated standards is not only "less worthy," they "deserve" to be treated as less than human, not even afforded the common decency of being allowed to live their lives in peace and basic comfort. Those who do not measure up "deserve" to be dehumanized, ridiculed, and forced to live in poverty according to these twisted standards.

The author postulates that everyone has a place and that everyone deserves to be treated as having an equal measure of worth. It is fine to praise people for high accomplishments, but those who cannot or do not wish to strive for such accomplishments are no less worthy than those who are society's "high achievers." I quite agree with the author on this point. Our world would be a much better place if we treated all people as equally worthy, regardless of their perceived ambition, attractiveness, intellect, innovation, or ability to perform for an audience. I believe that people as a whole would be much happier and there would be far fewer deaths caused by stress-related illnesses, far less anxiety and depression due to perceived personal inadequacy, and, thus, a greatly reduced suicide rate.

My criticism regarding the book is minor. I too learned to use "he" as the default in writing about a person whose sex is unspecified. From my point of view, this is archaic and sets men and boys as the default and women and girls as an aberration or second-class person.

I would also like to see the term "overweight" disappear. Over what weight? If the person is large or heavy, refer to them as large or heavy. We have all been taught to "other" larger people, and terms like "overweight" and the even worse "obese" pathologize big folks. It is possible to point out society's prejudiced attitudes towards heavy people without othering those people.


Aside from these issues, I have nothing but praise for this book. It is a brief, thought-provoking read written in simple language. I recommend it to everyone who has ever felt "less worthy" or who has pushed themselves to the breaking point to prove their worth. A job well done by a bright, thoughtful, and fully worthy individual!