Insecure Writers' Support Group Discussion of Are You There, God, It's Me, Margaret 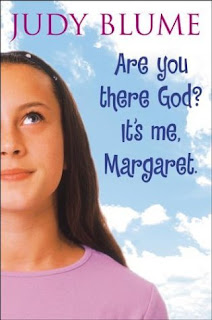 1. Throughout the book, Judy Blume shares Margaret’s prayers to God. Have you ever used prayers in either external (spoken) dialogue or internal (inner) dialogue? (Doesn’t even need to be directed toward God. Any sort of prayer counts.)

I was raised Catholic and I was quite devout until I got into my late teens. Honestly, one of the reasons I came to doubt the dogma of my religion was their attitude towards menstruation. I had hellish periods and the idea that I was being punished for Eve's indiscretion was odious to me.

3. Judy Blume writes in the first person, and I noticed she used small portions of narrative between dialogue to convey thought and feelings of the main character as they talked.

QUESTION: Do you combine narrative and dialogue?
Yes.

5. At the time it was written, this story was a contemporary, and now it reads more like a period piece (no pun intended). Is this story still effective? How could this story be re-imagined or updated to better appeal to the youth of today?
I don't think it should be changed. I think it is still relevant and I don't think it would work as well if it were modernized.
- July 24, 2019
Email ThisBlogThis!Share to TwitterShare to FacebookShare to Pinterest
Labels: how i write, insecure writers support group, losing my religion, writing challenges, writing for children and adolescents, writing style, young adult