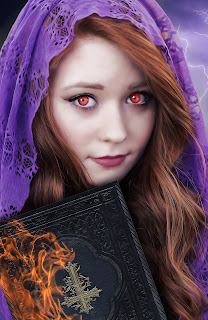 Image by Enrique Meseguer from Pixabay

Pegman watched as Gerry Clifford gazed through the ruby walls of the glass heart which surrounded him.  Everything in the afterlife was fine and good until the Humans figured out how to resurrect the dead.

Gerry tapped the glass. He admitted that “fine and good” was a stretch, and his current position wasn’t resurrection so much as entrapment. Nyarlathotep’s damn daughter had given the members of her wretched fangirl coven a spell to trap spirits in enchanted containers such as this stupid glass heart.

Gerry closed his eyes. He tried to project his consciousness back to the day when he and Paul found the moldy old bookshop in Crouch End, London’s seediest borough. He attempted to search for a spell through the eyes of the boy he had been.

A tap on the outside of the heart disrupted Gerry’s quest. He looked to see Arachne Desrochers smiling hungrily at him.

Notes:
Gerry Clifford is the male protagonist in Team Netherworld's long-running WIP, Fetch. At the beginning of the story, he was a Fetch, an Irish term for a spirit whose body still lives but is badly compromised. At this point, he is a minor angel. Until he became critically ill, Gerry was the founder of and one of the guitarists in the popular London-based band Mainline.

Arachne Desrochers is a young woman who is obsessed with Gerry, despite his being old enough to be her grandfather.

Yadira Root is Nyarlathotep's daughter and high priestess. She has the ability to traverse space, time, and dimensions and appear in any Netherworld multiverse.

Nyarlathotep is the creation of H.P. Lovecraft.

Crouch End is the creation of Stephen King.

Pegman is the Universal Observer. We have a blog devoted to Pegman posts. It has not been fed in a year. Don't put your hand inside the bars--it may bite.

Fetch is the flagship story in The Yadira Chronicles.