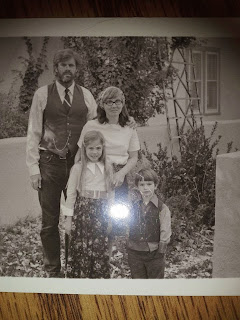 The ugsome little horse-faced troll in the maxi dress (b. 15 February 1965) is Yours Truly. I was seven years old then. The Ugliness Factor has only increased over the years. I can barely walk by a mirror without it shattering into a million fragments.
As Leonard Cohen once wrote, it's Father's Day and everybody's wounded.
I know nobody cares, but here are three poems for my father who is no longer of this world. I entered them for publication in an anthology and received a lovely rejection form letter. Well, my writing may be shit, but for some reason, I like it anyway. Probably because I have no taste. Here you go. Read it or don't. I don't have any fucks remaining to impart on what anyone thinks.
Happy father's day beyond the veil, Dad. Sorry you ended up with a daughter who is a talentless hack. Maybe you pissed off some powerful deity in one of your incarnations, or maybe the God you believed in is a bit of a prick. I don't really know.
If I could drink, I'd be blotto right now. I'd go to Lord Dampnut's Twitter feed and take a shot every time that reprehensible tangerine tin god said "witch hunt," "fake news," or "lying media," called someone a liar, or claimed that some publication or other which had something critical to say about his crap performance as a so-called leader was "failing." I tell you, I would be shitfaced to the point of slurred speech within 15 minutes and passed out within the hour.
I guess I should be glad that Lord Dampnut isn't my father.
Anyway, here are the unpublishable works of the biggest loser ever to be born onto this crap planet. Enjoy them or don't. Whatever.

For my Father: Spring
Your love of nature
Memories of sweet springtime
Petals yesterday