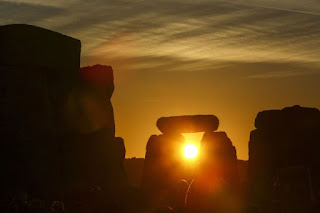 At the beginning of the day on the summer solstice, I leave my body sleeping and walk in dreams to a place I will never see in life. I watch the sunrise through rocks mysteriously stacked long ago and wonder if it was possible that I was there in some form.

Do I have a connection to a time and place I could not possibly have known in my current reality, or do I merely wish that I was more important than I am? Did I once have wisdom and abilities forgotten by the passage of centuries and lifetimes, or am I merely a pathetic creature who wishes there was a possibility that I might not be as utterly hopeless and wretched as I appear?

There was a time when I believed in one God and a single savior. Then came the time that I believed in many deities and no specific savior. At this point, I neither believe nor disbelieve in any specific thing, except that I think the god postulated by most organized religious institutions is a construct created to give adherents carte blanche to behave cruelly.

is there someone there
a powerful entity
or are we alone?

Note:
It is not my intent to belittle anyone's faith. The thoughts I express are mine and mine alone. I neither believe nor disbelieve in any particular deity or set of deities, including the Christian god. My final paragraph is a criticism of the sorts of people who use their religion to behave as intolerant bigots and to cause harm to those who do not adhere to their dogma and edicts.
- June 19, 2019
Email ThisBlogThis!Share to TwitterShare to FacebookShare to Pinterest
Labels: agnosticism, Christianity, dreams, Haibun, Heeding Haiku with Chèvrefeuille, Japanese poetry, long haibun, Mindlovemisery's Menagerie, mysticism, non-traditional haibun, Pagan, religion, religious abuse