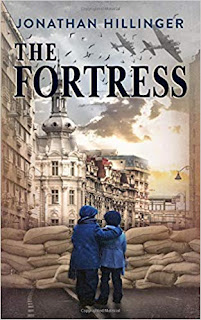 This review was duplicated on Amazon


The Fortress is a powerful and compelling story about refugees living in a network of underground tunnels beneath Bucharest during the Nazi invasion of Romania. I knocked one star off of the rating for technical reasons. The paragraph structure is sometimes cumbersome. Some paragraphs take up close to an entire page. Briefer paragraphs would strengthen the story's readability. There are also several instances of fragmented sentences. The manuscript could have done with better proofreading. Technical nit-picking aside, the story is incredibly moving and, in and of itself, deserves five stars.
When his girlfriend's purse is stolen by a pair of street urchins during a concert at the Atheneum, Daniel, a well-to-do young Jewish man discovers an amazing underground world inhabited by a group of homeless youth. He befriends the ragtag group of street kids living in The Fortress, as the tunnels are called by those who dwell there.
Daniel's kindness serves him well when antisemitism sweeps Romania and his family's home is destroyed by a group of thugs. The residents of The Fortress welcome Daniel and his family. Daniel's parents become parents to all of the youngsters living in The Fortress.
The author does an excellent job of describing the beauty of Bucharest before the Nazi invasion and the hell that it becomes following the changes brought by the invaders as well as the bold move made by refugees to the newly forming nation of Israel. I learned things about the history of Romania and the rise of communism as well as the rise of Israel.

I realize that paying for professional editing is often prohibitively expensive. However, authors can benefit nearly as much from enlisting beta readers to review their products prior to publication. The Insecure Writers' Support Group and Write-Edit-Publish group are good places to seek the assistance of beta readers.