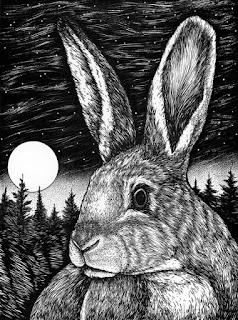 So, you think a rabbit can't be scary?
Well, Smartypants
Why don't you just try
To go outside
On the Night of the Lepus?
This ain't no Tale of Peter Rabbit, dagnabbit!
I assure you that The Bunnies Are Not In Their Beds
This is The Story of a Fierce Bad Rabbit
Rabbits and Raindrops?
Try Bunnies and Bloodshed!
Shiver and tremble
Beware and dread
The Night of the Lepus
Is upon us! 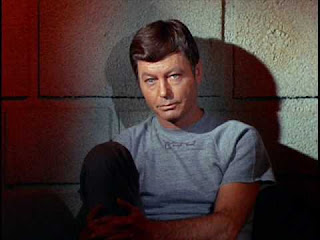 The book titles I used in the poem are listed below.
Full disclosure: The links allow the purchase of the books on Amazon, for which I get a small commission.

I have only attended one fan convention. I went to Star Con back in 1984. I treasure the fact that I was able to hear DeForest Kelley speak. He was a very nice man with a somewhat wicked sense of humor and an unexpected tendency to use salty language. He didn't just talk about Star Trek, he also talked about the Westerns he starred in and laughed about having to reduce the salt in his language when working with Loretta Young, who was a very straight-laced lady.
Unfortunately, I wasn't able to get his autograph. The poor fellow was suffering from altitude sickness and had to go back to his hotel room. The nasty woman in front of me snidely said that he probably had too much to drink. I had nothing to say to her and thought that if I had to deal with people like her very often, I'd probably be inclined to drink too.
In any case, I'm glad I got to spend time listening to the musings of a person whom I like very well, and I'm glad I got to see the terrible B movie that he was in. I'm pretty sure that it wasn't one of his prouder moments. The Night of the Lepus is not a great classic, but it is one of those movies that's so bad it's good.

Just in case you can't resist having a copy for yourself.