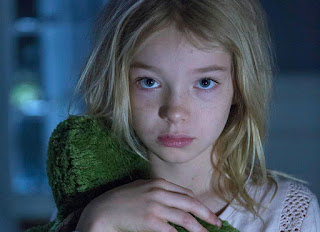 Shree Crooks as the title character in the 2017 film Stephanie

Young Shree Crooks gives a spellbinding performance in this otherwise forgettable film which can't seem to decide what it wants to be when it grows up. Is it a possession story, alien invasion flick, poltergeist tale, or an evil telekinetic kid thriller? Without giving away the plot for those who want to watch it, this film has some elements of all of these tropes, plus jump-scares to spare.
The film echoes elements of Arthur C. Clarke's chilling classic science fiction novel "Childhood's End"--badly. The producers should have studied the 1960 British film Village of the Damned, which did an excellent job in the presentation of its creepy, super-powerful children. While Stephanie has a few strikingly disturbing scenes, such as the moments that the character spends with her dead brother, Paul, the film is too disjointed to be salvaged by these moments.
Stephanie isn't the worst film that I've seen. I wish I could say something better about it than that.