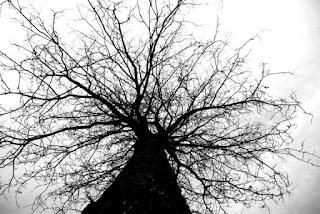 Shadow of a Tree
Photographer Unknown 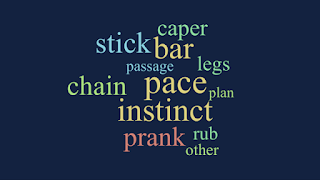 In the Dreamlands, the refugees were free to do as they pleased, which was a wonderful escape from the tyranny and hopelessness which was overtaking both the Netherworld and the waking world. Nonetheless, the woebegone shadows of the oppressed realms remained heavy on the hearts of the refugees. Like a distant hum, despair seemed to fall with the rain as Pepper followed the drops with her eyes from the zenith of the Dreamland sky into the teacup sitting before her on the patio table at the Falona Inn bar.
Pepper made a hollow entreaty to herself to not let the light interrupted by the billowing dark clouds reinforce the belief that she was only hiding from the truth on the other side of nothing, but her instinct to doubt caused her to reinforce her status as "other" in her mind.
Pepper couldn't help but think of the Cosmos as cruel. From the first day of her life, it seemed that there was a universal plan or vicious cosmic prank to ensure that she would forever be the girl with the cast iron smile. It mattered not at what pace she ran on fat legs the thighs of which could not help but rub together. It did not matter if she ran so fast that the sweat caused the fabric of her pants to stick to her fat thighs. It did not matter what tree-lined dream passage she dodged down or what wild caper she imagined for the characters in the many tales her mind concocted. She would always be yanked rudely back to a forlorn and hopeless reality by the chain which tethered her soul to eternal despair.
"The only book I've any business writing would be titled 'Dark Days: Biography of a Self-Professed Cynic'," the discouraged Pepper sighed as a single tear mingled with the rain on her face while she slogged towards Gerry's homestead in the Karthian Hills.
Every day, Pepper wondered if it wouldn't be best for Gerry if she set him free. What good could she possibly be doing him? She remembered how wonderful and terrifying it felt to find herself suddenly in love with the ingenuous little Fetch who nervously confessed that he wished to be more than friends when she presented him with the offer to become one of her invisible roommates.
That day seemed to have happened in another lifetime now. She had hurt the fragile Fetch, now a full-fledged angelic spirit, more than once and deeply with cruel words born from insecurity and past psychic wounds which had never fully healed. He remained supportive of her, said that he understood, but he was still fearful of fully connecting with her again, and she wondered if she would ever be able to close the gap between them and give him reason to trust her to love him as he deserved rather than accusing him of imagined infidelities.
The rain fell harder now and the path ahead was muddy. Pepper gave a shout as she slipped and fell face-down on the path, tumbling off into the shrubbery. She gave a discouraged moan and considered just lying there until the rain stopped or she woke up on her son's couch or the cold bedroom of her squalid mobile home. Suddenly, she felt as if a giant hand with very slender fingers had wrapped itself around her, and she was lifted into the air to find herself facing a Dark Young of Shub-Niggurath.
"I can take you to your home, Miss Pepper," the affable Dark Young said. "I know you think of it as his home, but it's your home too. He wishes you'd think of it so. Maybe when we get to your home, we can help each other to write our stories. I have read every one of your Bloody Velvet books, you know. It inspired me to write my own series about a lonely Dark Young who meets a Vampire Tree. I've found a few fans, both Dark Young and animated trees, who say my stories really get the sap flowing! Unfortunately, I cannot seem to get beyond the title on my latest one."
"What's the title?" Pepper inquired, heartened by the tenderness shown by the gigantic being who now carried her towards the Karthian Hills homestead.
"Well, the working title is Mr. and Mrs. Deadtree. It's a ghost story. Perhaps you can help me get it off the ground."
"I'd be happy to," Pepper replied, settling into the crook formed by two of the Dark Young's sky-reaching tentacles. She was pleased that this Dark Young smelled like moist loam rather than an open grave and appreciative of its green and guileless manner. Despite its gargantuan size, it was like a babe in the woods, still filled with hope and a belief that right action would be rewarded in kind. She intended to do her best to ensure that it remained that way for as long as possible.
"Does your kind drink tea?" Pepper inquired. "If you do, we can make some in one of the rain barrels for you."
"I take my nutrients from decaying leaves and the flowing streams and the Earth itself, but I would be happy to enjoy a rain barrel of tea," the Dark Young replied. "You will stay warm and dry in your room with the window open so I can speak with you from outside, and I will be happy for this torrent and the welcome sustenance it brings."

Titles/Sentence Fragments
A Distant Hum
Light Interrupted
Hollow Entreaty
Dark Days: Biography of a Self-Professed Cynic
Suddenly in Love
The Otherside of Nothing
Invisible Roommates
The Girl with the Cast Iron Smile
Mr. and Mrs. Deadtree
The First Day