Toys in the Attic: Becoming the Narrator 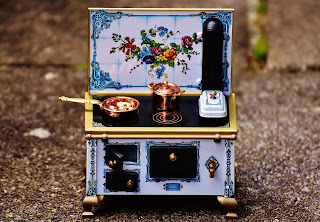 Sabella carried the dollhouse to the room she'd designated as her workspace. Perhaps Alex wouldn't be inclined to be as bossy with her if she kept the front room nice. It was true that she'd had problems with hoarding in the past, and she feared that she might have trouble parting with the interesting things from days gone by that she might find hidden in the rooms and attic of the house.
Sabella thought that perhaps if she cleaned her treasures up and kept them neatly on display, she might be able to open a collectibles museum. She doubted that there was much money in such a venture, but she was retired, so she had a steady if small income guaranteed, so long as the jerks in charge didn't decide to take away social security.
Sabella set the dollhouse on the table in the workroom, which itself needed a fair bit of work. She found a box with several exciting treasures which gladdened her heart. One was a miniature stove, white with blue trim and a pretty floral decoration on the face.
"It's not appropriate for you, House," she said to the spooky dollhouse. "But it's a thing of beauty, and it will be just right for another dollhouse.
Sabella turned on some quiet music and set to work cleaning and touching up the little stove. As she worked, a voice spoke quietly in her mind. She perceived the voice as coming from the spooky dollhouse. It wasn't a frightening voice, although it did startle her a little initially.
"The problem with this place is there is no narrator," the gentle masculine voice said, and Sabella now saw the speaker projected into her mind. He was a small man with long, dark hair and clothes which she believed dated back to the Victorian era. He had a British accent.
The thunder clapped outside and Sabella turned to watch the lightning flashing across the sky. The man in her mind smiled and waved his hand. An umbrella appeared, and he raised it as if protecting himself from the impending weather.
"I love the rain too," the man declared. "As I was saying, the problem with this place is that there is no narrator. It makes it quite impossible to tell one's story when there is no-one to tell it to. At last, I have found someone who can hear me, and I have a great favor to ask of you."
"What is that?" Sabella inquired, barely able to speak, her throat suddenly having gone dry.
"Well, get yourself a glass of water or a cup of tea. You'll not be offending me, I promise. I am simply wondering if I could implore upon you to become the narrator."
"What do you mean by that, Mister..."
"Washington. Brian Washington. It's technically Baron Brian Washington of Jerseyshire, but I don't give a whit for pretentious titles. You can call me Wash. My family always did, to distinguish me from my father, who was called Brian."
"Very well, um, Wash," Sabella replied, a bit skeptical that what she was experiencing was anything more than a figment of her imagination or the product of a quick nap. She noted that Wash had very big, beautiful, blue eyes the color of his waistcoat, wished for a moment that she was thirty years younger, and then admonished herself that he was either a ghost or a figment of her imagination, so such a thought was patently foolish. She cleared her throat and continued speaking to the spirit or figment.
"I understand that you'd like me to be your narrator. I will consider your offer, but I need to know what you wish me to do."
"Well, just listen to me, and write down what I say," Wash responded, looking at Sabella with a smile that indicated that he both liked her and found her a little silly, and she found herself again wishing that she was somewhere between forty and fifty, which was the approximate age that he appeared to be, instead of being seventy and attractive to no man outside of the senior center.
Sabella felt a slight warmth and tingling on the back of her hand, and although she could see no-one with her eyes, she could see Wash resting his hand on hers in her mind, and she blushed, hoping he wouldn't notice that an ancient woman was reacting to him like a twitterpated schoolgirl.
"I know you've always loved to write, but your ambitions have been fairly well crushed," Wash said gently. "You believe that you have no stories left in you. Well, you do, but it may take time to re-awaken your own ideas. So I will give you my words to share with the world, although I agree with you that the world may not deserve our words. Most of the world doesn't, but somewhere out there is a lonely girl just like you used to be who will be transported by your words. Let's write this story for her. Would you like to? I'll be your navigator on this journey if you'll be my narrator."
"Yes, I'll be your narrator," Sabella said, this time allowing a joyful smile to spread over her face. "I do hope you're a ghost and not just a figment, Wash. I'd like you to be a friend that I can keep and not just a dream that will fade when the story is done."