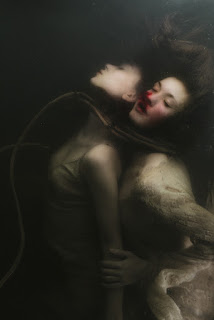 In Tune with the Infinite
Copyright Mira Nedyalkova

The day after her troubled brother Daniel's disappearance, a tearful Amber Clifford-Collins showed her Uncle Paul the disturbing final entry in Dan's diary.

Notes:
Although we believe this works as an eerie stand-alone piece, it is also part of Team Netherworld's WIP, Fetch. The Fetch blog is for Team Netherworld members only, but I reposted the chapter where Daniel describes meeting the Annegare, as he calls the mermaids of Cerenarian Sea, to his sister, Amber.
Annegare is an Italian word meaning "to drown." It is pronounced an-ne-gar-re.
Etymology: from Latin *adnecare, from necāre, present active infinitive of necō, “kill”.
Earth's Dreamlands and the Cerenarian Sea are the creations of H.P. Lovecraft.
Amber Clifford-Collins, Daniel Clifford, and Paul Clifford are original characters created by Team Netherworld.