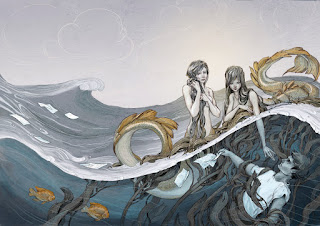 Notes:
The Cerenarian Sea is a location in Earth's Dreamlands. Both it and the Dreamlands are the creations of H.P. Lovecraft.
This post was originally published 3 August 2015 on Team Netherworld's private blog for our WIP, Fetch. I am sharing it now to give context to a new addition to this work. Sadly, Fetch has been on the back burner for far longer than I would like.

"Danny, you bastard, I do not bleedin' need this shit from you!"

Thirty-four-year-old Daniel Clifford opened his eyes slightly to glimpse his frightened and angry younger sister Amber standing by his hospital bedside. A tear began to slowly trickle from Amber's eyes; eyes the same strange, color-changing hue as their dying father's.
"You ain't been takin' your meds, Danny, I know you ain't. Don't you think the way Daddy's dyin' is enough for me to deal with? You pique me, you blighter, you really do! How dare you wallow in self-pity when I'm tryin' to care for our father, who don't even know who I am half the time, I'm tryin' to take care of you too, and now I've got..."
Amber stopped herself short, her hand resting on her abdomen. Daniel reached to irritatingly pat the slight bulge.
"So you ain't just plumped up a bit from eatin' too much Spotted Dick?" he teased as Amber pushed his hand away. "I thought as much. But why the hell would you think you had to keep it a secret from me?"
"I was just bein' circumspect," Amber said softly. "Your hold on things is so shaky lately, Dan."
"Well, me life's in rubble and it's as if the enemy is paradin' about lightin' triumphant bonfires on the ruins," Daniel retorted. "Is it any wonder I don't feel much like remainin' tenacious, fightin' the good fight and all? Still, I don't see why you'd think that you needed to hide your good news from me. Don't you think that perhaps knowin' I'd a little niece or nephew I'll need to be helpin' out with might make me want to live to fight another day?"
"I hope it does, Danny," Amber quavered, bursting into tears.
Daniel pulled his sister close and held her for a moment. She looked at him with concern and curiosity.
"Danny, when the medics revived you, you said a strange word. I wonder if you might remember if I told you."
"Well, try me."
"Annegare."
"That's what the supplicants said. They called themselves Annegare."
"What were they?"
"They was the mermaids in the Cerenarian Sea," Daniel said softly. "They called to me. One of them said 'I am your supplicant, Daniel Oliver Clifford. You need struggle no longer. Come to us and be free.' I was at the liminal point of joinin' them permanent-like when you came in and pulled me outta the water. Oh, Amber, I'm ever so sorry, but I so wanted to join them, to swim with them in the warm water of the Cerenarian Sea forever. I just wanted me a little joy. It's been so long since I had that."
"Me too," Amber sighed, nestling next to Daniel like she had when they were children and she'd had a nightmare. "Maybe this baby will bring some joy to all of us."
"Boy or girl, or do you know yet?"
"Girl. Vance and I thought to name her Gerri Olivia."
"I like that," Daniel declared. "I make my solemn promise that for Gerri Olivia, I will resist the call of the mermaids from the Cerenarian Sea."
"Thank you, Danny," Amber said. "Little Gerri will need her uncle, and I need my big brother. I'm already losing Daddy. I can't bear to lose you too."