Review of Ship It by Britta Lundin 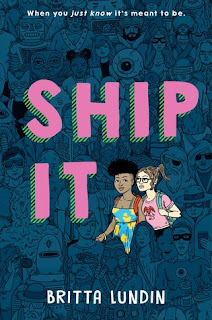 This is a duplicate of my review for this item on Amazon.

I generally don't write negative reviews. If I dislike something, I tend to put it aside. I try to find something I like even in things that didn't hit home for me. However, I never thought I'd find anything which made Twilight look like a literary masterpiece, and I found it in this book.
Claire, the heroine of the story, isn't just socially awkward, she's malicious.
I know this is a work of fiction, but basic reality stepped out of the room when a television show geared to adults asks a teenager to become a consultant and adults confide sensitive personal information to this teenager.
I probably wouldn't have written a review for this book at all, except that Claire illustrates an extremely toxic aspect of fandom culture. She doesn't like being told "no," and she behaves in a vindictive and malevolent fashion when an actor who plays one of the characters she ships doesn't support said ship. She is disrespectful, self-absorbed, and unlikable.
This book reads like not particularly well-written fan fiction. It was touted as being humorous, and I was hoping for a likable geek in its heroine. Instead, I found Claire, who is the sort of fan that no actor or creator wants. She is an obsessive backstabber.
I probably would have liked Rico better if he didn't seem like a two-dimensional cardboard cutout. Aside from Claire, the characters were props with no particular distinguishing features to compel the reader's interest.
Perhaps the author was attempting to make Forest (the actor who refuted Claire's beloved ship) more unlikable through unflattering physical description, but "watery blue eyes" makes me think the poor chap is having an allergic reaction to something and needs a Zyrtec and some Visine, stat.
Regarding Claire's love interest, Tess: I want to care at least a little if the hero/heroine gets their guy/gal. The Claire-Tess romance seemed forced and I really couldn't care less. Tess was a prop, and Claire was self-serving and odious. Such a character would be fine if that's what she was supposed to be, but it isn't. She was supposed to be a sympathetic character.
Claire was a great illustration of the downside of fandom culture. Beyond that, there was nothing great or even particularly entertaining about this book. Perhaps Ms. Lundin's forte lies in scriptwriting rather than novels.